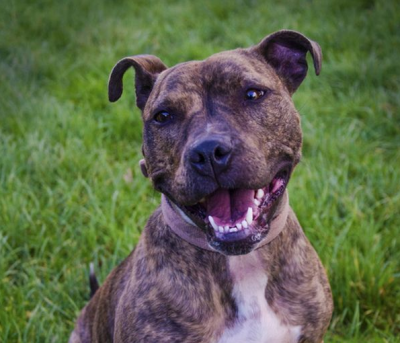 Bia the Staffie, now three years old, has spent 700 days – most of her life – at the RSPCA’s Blackberry Farm animal centre in Aylesbury, Buckinghamshire. She has watched her playmates being adopted one by one, but so far has not been given a chance herself.

Charlotte Wright, who works as a kennel supervisor at Blackberry Farm, said, “Bia is such a sweet girl and is a keen favourite among staff and volunteers. On top of that, she is very bright and adores being around people.”

The unlucky pup found herself in the RSPCA’s care after being found in a severely neglected state in a back garden, and according to the centre’s staff she has never known what life in a home may be like, having been kept outside by her previous owner. The ideal home for her would be one experienced dog owners, where she may be the only dog, with secondary school-aged children.

“Bia will make a wonderful companion for someone. She is really good with activity toys and picks up commands amazingly quickly. Bia is also really good around people,” Charlotte said. “She has been in kennels nearly all her life, but with the right owners, she will flourish in her new environment.”

If you think you can give Bia the home she deserves, contact Blackberry Farm through her profile or on 0300 123 0752.

Image by the RSPCA.